Substance for the plant nutrition

The most important substances for plant nutrition are: phosphorus, potassium, nitrogen, iron, calcium, magnesium, and boron. All the elements belonging to the plant, perform certain functions. The role of minerals in the process of plant growth is very diverse. All plants need not only oxygen, carbon and hydrogen (organogenic) but they require phosphorus, sulfur, nitrogen, magnesium, calcium and iron.

As a result of various studies it was discovered that for optimal growth and development of plants required a set of substances present in the soil in minute amounts. In addition to iron, digestible plant, it is also necessary copper, zinc, boron, cobalt, manganese, and molybdenum.

All the above elements are used in nutrient solutions, the nature consumption divided into three groups:

2) microelements – copper, boron, zinc, manganese, cobalt, molybdenum, and other consumed in small amounts (up to one hundred thousandth of thousandths of a percent);

Plant for their normal development should receive all necessary minerals in proper concentrations in dissolved form. If the plant does not receive the required number of the element appear signs of starvation. By adding of the element these signs are removed. If the plant receives a microelements in excess it turns poisoning plants. For example, boron and copper at concentrations above 1 mg per 1 kilogram of soil inhibit the growth of many plants. The starvation begins when the concentration is below 0.5 mg per 1 kilogram. This can be explained by the fact that these mineral elements are involved in the construction of cellular organelles and protoplasm. Furthermore, they provide a certain structure biocolloids living matter without which the life processes can not proceed.

Phosphorus is contained in the organic soil and mineral form. The mineral phosphorus prevail in podzolic and acidic soils. Therefore, liming of the soil improves plant availability of phosphorus-containing compounds. If there comes a phosphate starvation, plant leaves are yellow-green, delayed the process of laying the flower buds and the beginning of the flowering plants, and deteriorating quality of flowers.

Nitrogen is essential for normal plant development. With a lack of this element of the plant leaves are pale yellow-green with reddish spots. In the case of nitrogen starvation leaves are thinner. Usually nitrogen is contained fertile soil layer in a form that is unavailable to plants. However, as a result of microbiological processes from inaccessible nitrogen forms converted into assimilable form plants. In the soil there are some micro-organisms that metabolize nitrogen from the air and make it available to plants. However, the dressing of nitrogen fertilizer plants in most cases is necessary, as the soil in this element are poor.

Magnesium – an element that is included in the plant chlorophyll. With a lack of this element leaves become fragility, become “marble.” Magnesium creates a neutral soil reaction, and also helps to eliminate the harmful effects of excessive amounts of lime. Potassium is needed to plants for a variety of physiological processes that occur in them. This element is responsible for the development of the root “system. His presence makes the root system of plants more frost. Typically, the potassium is contained in the soil of from 1 to 2.5 percent. In very heavy and medium soils, potassium contained in the absorbed state. This is the main power plant in potassium. Especially needed potash for light, podzolic and peat soils. When potassium deficiency suffer most upper leaves of the plant. They are clarified, the edges turn yellow, and green are only portions of the sheet surrounding the vessels.

Calcium is present in the soil in the form of phosphates, carbonates and other salts. The presence of calcium in the soil improves its properties. However, this element is in a small amount for plant nutrition. Calcium is introduced into the soil in order to normalize its acidity.

Iron supports the normal development of chlorophyll and chloroplasts in plants. If insufficient iron in the soil, the leaves become marbling, color them becomes uneven, comes chlorosis of leaves and aging, as chlorophyll breaks contained in them.

Cobalt also increases the stability of chlorophyll in plants.

Boron is essential for chloroplast. Lack of this element in the soil leads to the degeneration of plant chloroplasts.

Molybdenum is present in trace amounts in soil is responsible for the normalization of the functions of plastids.

Copper is responsible for redox reactions in plant cells.

The accumulation of dry matter of the plant is due to the absorption of carbon dioxide through their leaves (so-called “air power”) and water, nitrogen and ash elements – from the soil through the roots (“root nutrition”).

Photosynthesis is the main process leading to the formation of organic substances in plants. During photosynthesis, the solar energy in the green parts of the plants containing chlorophyll, is converted into chemical energy which is used to synthesize carbohydrates from carbon dioxide and water. In the light stage of photosynthesis takes place the water decomposition reaction to produce oxygen and the formation of energy-rich compounds (ATP) and reduced products. These compounds are involved in the next step in the synthesis of the dark carbohydrates and other organic compounds from CO2.

The formation as a product of simple carbohydrates (hexoses) overall equation of photosynthesis is as follows:

By means of further reactions of simple carbohydrates in the plants produced more complex carbohydrates, and other nitrogen-free organic compounds. The synthesis of amino acids, protein and other organic nitrogen-containing compounds in the plants is carried out by mineral nitrogen compounds (as well as phosphorus and sulfur) and intermediate metabolic products – synthesis and decomposition – carbohydrates. The formation of various complex organic substances that make up the plant, spent the energy stored in the form of high-energy phosphate bonds of ATP (and other energy compounds) during photosynthesis and released upon oxidation – in the process of breathing – previously formed organic compounds. The intensity of photosynthesis and dry matter accumulation depending on the lighting, the content of carbon dioxide in the air, plants, water availability and mineral elements.

Nitrogen and mineral elements are absorbed from the soil surface of the active root system of plants in the form of ions (anions and cations). For example, nitrogen can be absorbed in the form of anion and cation NO3 NH4 + (only legumes are able to root nodule bacteria symbiosis with molecular absorb nitrogen atmosphere), phosphorus and sulfur – in the form of anions of phosphoric and sulfuric acids – N2RO4- and SO42-, potassium, calcium, magnesium, sodium, iron – as cations K +, Ca2 +, Mg2 +, Fe2 + and microelements – as respective cations or anions.

Plants not only absorb ions from the soil solution, but also the ions absorbed colloids. Moreover, the plants are online (thanks to the solvent power of root exudates, including carbonic acid, organic acids and amino acids) act on the solid phase of the soil, transferring the necessary nutrients in an accessible form.

DJALA GOLD Company is a manufacturer of organic fertilizers, which contribute to the normal diet of plants, providing a full range of necessary nutrients. 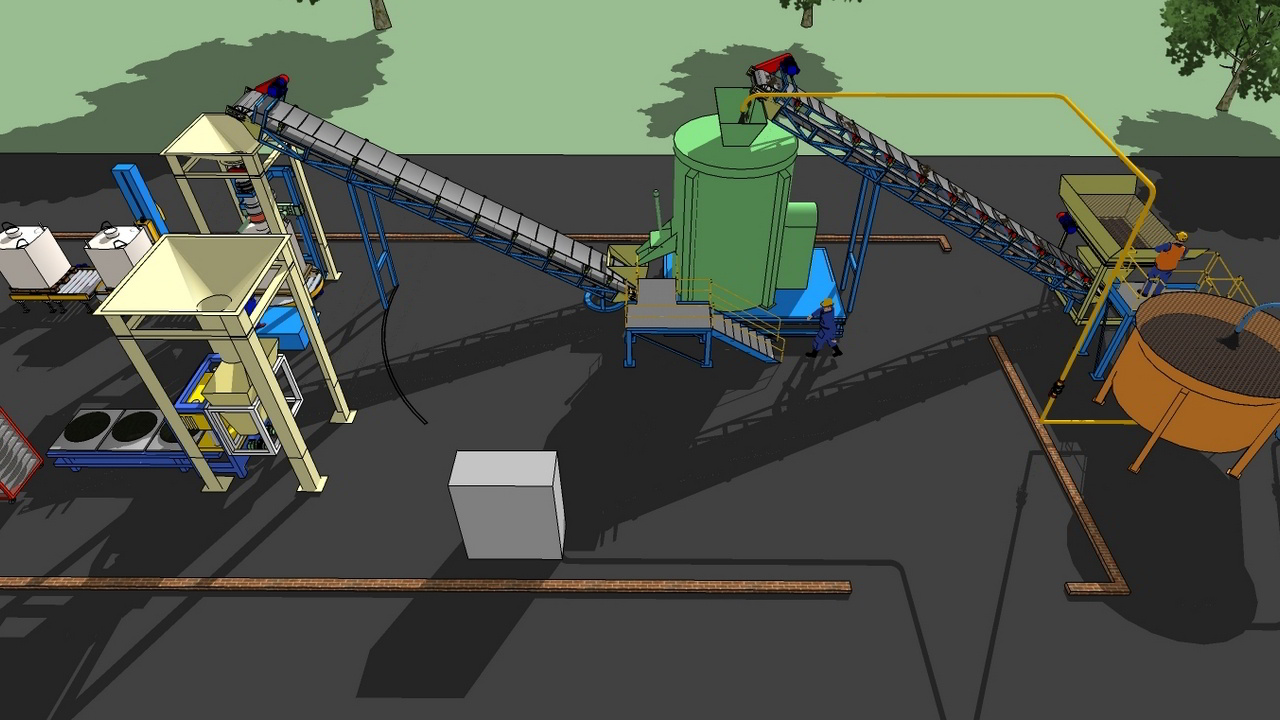 Industrial machinery for the production of fertilizers